Heroes and Villains Wiki
Register
Don't have an account?
Sign In
Advertisement
in: Characters, Harry Potter characters, Fantastic Beasts and Where to Find Them characters,
and 11 more

View source
watch 01:36
We're Getting Mutants in the MCU - The Loop
Do you like this video?
Play Sound

Fantastic Beasts: The Crimes of Grindelwald
The Secrets of Dumbledore

Head of the Auror Office

Hogwarts School of Witchcraft and Wizardry

"It's time to pick a side, Newt."
Theseus Scamander is a major character in the Fantastic Beasts and Where to Find Them. He was an Auror and the older brother of famous magizoologist Newt Scamander, whom he had a strained but loving relationship with, and the brother-in-law of Porpentina Goldstein and great-uncle of Rolf Scamander.

By The Crimes of Grindelwald, Theseus was regarded as a war hero after his involvement in the First World War, and was promoted to Head Auror during the early days of the Global Wizarding War, with Theseus greatly contributing to the effort against Gellert Grindelwald. He was engaged to Leta Lestrange until she gave her life to protect Newt and Theseus as Grindelwald killed her.

Theseus Scamander was born between 25 February 1888 and 23 February 1889 to Mrs Scamander, who was a breeder of hippogriffs and was the older brother of magizoologist Newt Scamander. Despite his mother's hobby of breeding fancy hippogriffs, Theseus evidently never shared his brother's interest in the field of Magizoology, and regarded caring of magical creatures as a fine way of passing the time, but did not take it seriously as a professional pursuit. Like his mother, Theseus was against his younger brother's choice of career as a magizoologist.

Like his brother, Theseus attended Hogwarts School of Witchcraft and Wizardry and was sorted into Hufflepuff. He would finish his education earning at least five N.E.W.T.s, with top grades of either 'Outstanding' or 'Exceeds Expectations. After graduating Hogwarts, Theseus joined the British Ministry of Magic and began his career as an Auror.

He was considered a war hero during the First World War and was promoted to Head Auror during the early days of the Global Wizarding War, with Theseus greatly contributing to the effort against Gellert Grindelwald.

Fantastic Beasts: The Crimes of Grindelwald

By 1927, Theseus became engaged to Leta Lestrange, a friend of Newt's during their days at Hogwarts. Three months after Grindelwald's escpae from MACUSA custody, Theseus was around when Newt Scamander was applying an appeal to lift his travelling ban for the fifth time Theseus was included in the commission, along with Torquil Travers, Rudolph Spielman, and Arnold Guzman. Before they entered the room, Theseus warned Newt to behave more decently than usual. The men offered to reverse the decision on Newt's appeal if he became an Auror like his brother and kill Credence, who Theseus confirmed survived New York and fled to Paris. However, his younger brother refused and walked out of the meeting when Gunnar Grimmson, the bounty hunter, was hired to assasinate Credence. Theseus, infuriated, followed his brother outside of the commission, telling Newt that he would one eday have to chose a side, which his brother refused to do. Theseus embraced Newt to say goodbye but warned Newt that the Ministry was watching him.

He, Leta, Travers, and a few Aurors were sent to Hogwarts Castle, where they questioned Albus Dumbledore about the rumors circulating Newt's travels to France. After the questioning of Dumbledore was over, Dumbeldore warned Theseus that if he ever trusted him, he should not let Travers to send himself at Grindelwald's rally.

He and Leta left to visit the French Ministry of Magic, where Theseus participated in the deliberations durign which he learned that Grindelwald was vonvening a rally for his supporters. He informed Leta of the situation. The woman asked her fiancé and told him to promise that he would be careful, which Scamander agreed, and then told her that rumours were circulating about that Credence might be her missing brother. In reply, Leta said that her brother died. Theseus agreed with her, but also noticed that the documents would confirm it, because they never lied and left her.He later pursued Porpentina Goldstein and Newt, both disguised as Leta and Theseus. However, they escaped because Tina blasted Theseus into a wall and tied him up, allowing Newt and Tina to escape,

At Cimetière du Père-Lachaise, Theseus had ordered his Aurors to break up Grindelwald's rally, but he defied Travers and stated listening to Grindelwald was legal. He later led the Aurors to attack the evil wizard, who was angered into conjuring a blue ring of fire, where Grindelwald told Theseus and the others to join him or die as an alternative. Theseus refused and helped his brother in a double spell projected to deflect Grindelwald's fire, where Leta interferred. She expressed her love to Theseus and Newt before stunning Vinda Rosier and engaging Grindelwald herself, where the evil wizard attacked Leta, who shouted for Theseus to escape before her death. Enraged, Theseus refused to leave without her as Leta sacrificed herself. Newt was forced to Disapparate with Theseus, grabbing his brother's hand.

Grindelwald unleashed a disasterous fire that nearly killed Theseus, Newt, Tina, Yusuf Kama, Nagini and Jacob Kowalski. Howeever, they were saved by Nicholas Flamel, who instructed the Scamander brothers, Porpentina and Kama to use the General Counter-Spell. After successfully defeat Grindelwald's fire, Theseus was overcome with grief at the loss of his fiancee and began crying. Newt shared his brother's grief due to their loss of Leta and hugged his older brother.

Theseus later returned to Hogwarts with the other survivors and forbade Travers to meddle in Newt's and Dumbledore's conversation and to remove the admonitors while allowing Newt to deliver the Grindelwald pendant up to Dumbledore that held their blood pact. 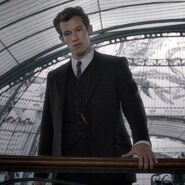