"Good morning, my lady. I thought we could play a little game."

"You've won the battle but you've lost the war."

“You have made perfectly clear how you feel about me and my kind. You're not as different from Uther as you would like to think."”
―Morgana to Arthur Pendragon after their intense reunion in Season 4

Morgana is portrayed as being vengeful, ruthless, embittered, cold and calculating. Having turned against her closest friends and even her own family, Morgana zealously pursues what she believes to be her rightful throne as well as the downfall of her enemies, even those she once cared about. She is a highly isolated and darkened character who resembles her biological father far more than she cares to admit since she, like Uther Pendragon, has suffered greatly on an emotional level and is unwilling to let go of past suffering. Additionally, Morgana seeks to avenge her losses but ultimately fails to achieve satisfaction, which dooms her to be perpetually unhappy, a fact first pointed out by Queen Annis much to Morgana’s ire. In spite of her apparent callous antipathy, on rare occasions, Morgana shows a sorrowful melancholy that she herself does not expect to feel, such as upon the death of Uther, the resurrection of Lancelot as a mere shadow of his former glory and her confrontation with Arthur.

Earlier in life, as the King’s ward, Morgana displays a spirited, quick-witted and compassionate nature. While in Camelot she is considered by many to be very beautiful and attracts the attention of numerous men, including Knight Valiant, Merlin and Arthur Pendragon. However, Morgana proves to be both beautiful and capable; she is also fiery and independent and will not hesitate to stand up to Uther, despite his being her guardian. She always takes issue with his cruel and unjust persecution of magic-users, believing that his punishments are unfair and unfitting. When necessary, she also displays her courage and ability as a fighter, always intervening to stand up for what she feels is right. Like Uther, she too is very stubborn, and when Arthur told Uther that he lost a bet against Morgana, Uther told him that he should have known better than to mess with her.

Despite portraying a fierce but just and independent personality at the court, on the inside Morgana is feeling great fear, depression and loneliness while in Camelot. Not knowing that she is Uther's daughter, the thought that he may find out about her magic greatly stresses her, taking into consideration his attitude towards magic. Unable to find anyone to help her and having no one to turn to, she slowly envelopes herself in loneliness and depression, which fleetingly disappears at the company of creatures like Morgause, Alvarr and Mordred, who are like her. After Merlin poisons her and almost causes her death, Morgause takes her with her to cure her, and Morgana spends over a year with Morgause. When she returns, she is a different person; vengeful and more cruel, she returns determined to take revenge for beings like herself against Uther and the magic-hating Camelot.

Though Morgana initially believes Arthur was a better man than his father and would be a fair ruler, she ultimately becomes more and more fixed on her belief that the Pendragons are not fit to rule Camelot and seeks to take the throne herself, despite her also being a Pendragon in blood. She joins Morgause in her regicidal ambitions and eventually operates alone in trying to kill Arthur. Despite being motivated by her disagreement with Uther's tyrannical regime, Morgana herself lapses into a reign of cruelty during the times she rules Camelot to gain the allegiance of the people, such as executing innocent people in her first reign, and threatening to burn peasants' crops in her second reign. Morgana also takes a sadistic pleasure in tormenting Uther and forcing Gwaine to fight for food, as well as willingly torturing Elyan for information.

Despite her vindictive and unforgiving personality, however, Morgana remains a powerful, arrogant, intelligent, overconfident, and ferociously determined individual. Her darker characteristics are largely the product of external influences while her truer nature was portrayed as one of immense compassion. This nature has arguably not disappeared due to the melancholy she sometimes showed and she does at times reveal a vulnerable side of herself, such as her shock and hurt on hearing of Agravaine's death, her deep conflict at seeing Arthur again, her fear at being rendered powerless and her elation at being healed by Aithusa.

This nature is explored more after her liberation from her prison. The time she spent with Aithusa made her more vulnerable and at times she shows her softer side to the young creature. Even at her enemies, she shows acts of kindness, as shown when she ordered her men to burn Finna's corpse after her suicide. She also displays a caring, loving side, like a mother figure towards Mordred, as he is the only one she can still consider her friend. After turning his back on Arthur and delivering Emrys' true name to her, Mordred is the one she was able to forgive, even after he tried to kill her twice, and when he died at the hands of Arthur, she swore vengeance at her friend's grave. From this point forward, Morgana became more sadistic, psychotic and cruel, even towards her allies, and her only goal became the death of Arthur Pendragon, which she initially realises, shortly after she is slain by Merlin. 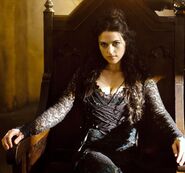 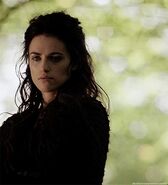 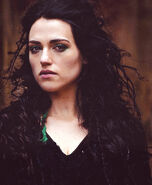 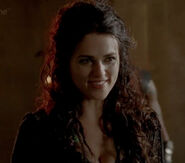