Heroes and Villains Wiki
Register
Don't have an account?
Sign In
Advertisement
in: Featured Articles, Characters, Avengers characters,
and 18 more

Agents of S.H.I.E.L.D (Mentioned only)
Loki

Loki from Thor comics and the Norse myths

“I, Loki, Prince of Asgard, Odinson, the rightful King of Jotunheim, God of Mischief, do hereby pledge to you, my undying fidelity.”
―Loki to Thanos

He is the adoptive brother of Thor, son of Laufey, adoptive son of Frigga and Odin, and the Prince of Asgard.

Born Loki Laufeyson, he was abandoned as a baby on in a Jotunheim temple by his father for being small. His mother’s identity is unknown. He was picked up by Odin, who had just defeated Loki's biological father. Odin took the baby in and named him Loki. There, in Asgard, Loki was raised alongside Odin's biological son, Thor. Though the two often played and fought together, Loki often felt overshadowed by Thor, since the eldest was favored by Odin. Instead, Loki was close with his mother who taught him magic.

Learning all these skills, Loki had one time disguised himself as a snake and stabbed his brother. Loki, at one point, also turned his brother into a frog. Thor also came up with a method called, "Get Help." Loki found it humiliating, as he was the one Thor threw into the air. He later said that it was the worst thing ever and wished to never do it again.

Loki is a slender Asgardian with white, pale skin with black hair and green eyes. His hair is mid-lengthed throughout most of Thor. However, it grew longer throughout his entire appearances.

“Dear brother, you're becoming predictable. I trust you, you betray me. Round and round in circles we go. See, Loki, Life is about... it's about growth. It's about change. But you just seem to just wanna stay the same. I guess what I'm trying to say is that you'll always be the God of Mischief, but you could be more.”
―Thor to Loki

Loki is initially portrayed as power-hungry and uncaring and villainous. However, he is notably less boisterous as Thor is, being more quiet than his brother. This was evident when he did not rage like Thor did when their father was investigating how the Frost Giants entered Asgard. He felt jealous and overshadowed of Thor, whom their father showed more favoritism towards.

Earlier in the franchise, Loki usually had no care for humanity, seeing it as a weakness and even bullying Thor about it.  Due to being manipulated by the Mind Stone, Loki was influenced by its terrifying power. At that point, the only human being Loki feared was Bruce Banner when he was the Hulk, often traumatized from the event when the Hulk smashed Loki on the floor and called him a "puny god" back at the Battle of New York.

Despite his deceitful nature, Loki did care a great deal about his adoptive family especially towards his mother, Frigga, whom he was close too. She taught him magic while Thor was taught to be a warrior by their father. Also, instead of killing Odin, he merely wiped his memory of being the King of Asgard and left him at a retirement home. He and Thor eventually fully reconciled after a thousand year grudge in Thor Ragnarok. He later died trying to save him and selflessly would have given up the Tesseract to Thanos in exchange for Thor's life.

After ruling Asgard two years, Loki was forced by Thor to reveal himself to the entire Asgardians, much to her shock.

Thanos kills at least half of the Asgardians on the ship, with Loki, Thor and Hulk being the only survivors of those who were not killed. Thanos has Loki cornered by the Black Order, knowing he has the Tesseract that contains the Space Stone. Thanos threatens to kill Thor if Loki does not hand it over.At first, Loki tells Thanos to kill away. However, the god of mischief finally gives in when he is forced to watch his brother being tortured. Loki conjures the Tesseract up and holds it up to Thanos. Thor insults his brother, because before, he thought that the Tesseract had been destroyed on Asgard. However, Loki tells his brother that the sun will shine on them again. Thanos mocks Loki's optimism; however, the god of mischief was distracting Thanos before allowing the Hulk to attack as Loki quickly tackles Thor down. However, Thanos is able to subdue the Hulk. As Loki is professing his "allegience" to Thanos, he conjurs a dagger behind his back and attemtps to kill Thanos. However, the Mad-Titan senses what Loki is doing and chokes Loki before killing him. Thor is left to go to his brother's body as Thanos and his children leave for Earth

Rocket Raccoon and Thor Odinson from the past passed 2013 Loki undetected.  There, he is bored in his cell and throwing a ball around.  Meanwhile, the 2012 version of Loki's history remains escapedthe same until the aftermath of the Battle of  New York. He while using the Tesseract and also avoided capture by creating another portal.

Differences from the comics 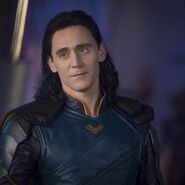