“D'Artagnan can't know about this, not now. It will only distract him."
"You know he loves her."
"All the more reason to keep it from him.

”
―Aramis and Athos discussing on d'Artagnan's love for his wife

Constance D'Artagnan (formerly known as Constance Bonacieux) is one of the two deuteragonists (alongside Treville) of the 2014-16 BBC television series, The Musketeers, portrayed by Tamla Kari.

She is d'Artagnan's wife and lover when they weren't married and was formerly married to Jacques-Michel Bonacieux.

Constance first meets D'Artagnan when he is running off from the guards and, thinking Constance to be a wench, kisses her so the guards cannot see him. However, Constance is appalled by the stranger's advances and begins yelling at him until D'Artagnan collapses. She takes him back to her house and nurses him back to consciousness. Constance later follows D'Artagnan for the Garrison because she saw the look in a man's eye when he is looking for trouble. She intervenes on the duel and takes D'Artagnan back to her house after Athos is arrested by the King's guards. Constance tends to his wounds before he goes to join Porthos and Aramis on finding out who is responsible for framing Athos. She helps them by pretending to be a wench while Porthos goes to knock the guard out. Constance, though told by D'Artagnan to hide, shoots a man to save D'Artagnan. He takes her back home before her husband finds her gone.

Constance saved d'Artagnan shortly after he was accused of a murder. The two of them gradually fell in love with each other and had a romantic relationship while Constance was still married.

They became more open of their relationship in series 2, especially kissing in front of their friends and the royal family despite being married.

The episode after her husband's death, she finally decides that D'Artagnan is the person she loves the most and admits that she loves him moments before her would-be execution. In the series 2 finale, Constance and D'Artagnan marry each other. They are shown happily married at the end of series 3.

The Queen meets Constance when she summons her and her husband, Bonacieux to the Louvre. There, Anne hires Constance to be her confidante and lady-in-waiting. Over the course of series 2, Anne and Constance become very close friends. In the mid-series 2 finale, Anne reveals to Constance that her son's birth father is not the King but Aramis. They are both protective of each other, shown when Anne happily embraced Constance when she was reunited with her in "Through a Glass Darkly" and Constance attacked Rochefort as he attempted to rape Anne.

Aramis was friends with Constance before the series began. He admired her fighting and fiery spirit, especially when she slapped Aramis for acting cold about d'Artagnan's arrest, unaware that it was a setup planned by Aramis and his friends so d'Artagnan could infiltrate a criminal's camp. By  season 3, they are close friends, with Aramis considering Constance family. 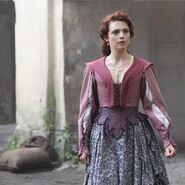 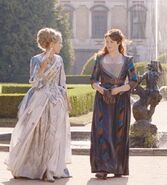 Retrieved from "https://heroes-and-villain.fandom.com/wiki/Constance_D%27Artagnan?oldid=35240"
Community content is available under CC-BY-SA unless otherwise noted.