Heroes and Villains Wiki
Register
Don't have an account?
Sign In
Advertisement
in: Characters, Kids, Casper the Friendly Ghost characters,
and 10 more

Ghost child who is white, has blue eyes

To become a friendly ghost and make a friend (Succeeded).

Flight, Invisibility, Walking through Walls, Shapeshifting
Casper the Friendly Ghost is the main protagonist of the Harvey Comics of the same name. Unlike most ghosts, Casper dislikes haunting humans and hopes to make a friend. His main companions are Wendy the Good Little Witch and Hot Stuff the Little Devil. Casper also owned a ghost horse named Nightmare. He often gets caught up in his uncles, the Ghostly Trio's shenanigans and has to stop them from doing any damage they could get away with.

Casper was created by Seymour Reit and Joe Oriolo

Casper is a well-to-do and friendly ghost who sees the best in everyone and tries to become friends. He is mostly seen as a loner in most of his films, especially trying to make friends with children who are not scared of him. Revealed in some of the comics, Casper actually had enjoyed scaring humans (or "Fleshies" as the ghosts called them). However, he got rather bored with it and eventually became the friendly ghost everyone knows today. Due to this, Casper was good friends with those he befriended. Even when things get hard for Casper and his friends, he does whatever it takes to make it up to them. For example in the 1998 film, Casper Meets Wendy, Wendy immediately blamed Casper for telling the Trio that her aunts and her couldn't use magic. Casper does his hardest to make up to her, especially trying to save her from the Wizard who vowed to destroy her.

He has multiple friends of different races. His closest companions include Wendy and Hot Stuff. Of the three best friends, Casper has a major crush on Wendy.

Some people take advantage of Casper's friendliness, especially the Trio, who dislike that their nephew is different from mall the other ghosts. In one of the cartoons, a little cat was terrorizing a dog and pretended to act as if the dog was the one responsible. Casper fell for most of the little cat's antics against the dog, but he eventually saw the cat made the dog act like the bad guy.

Despite his friendliness, Casper is highly annoyed by his uncles, the Ghostly Trio's and his cousin, Spooky's antics. There are several times where Casper sometimes drives away from his reputation as being the "Friendliest ghost you know." In one episode of the old Casper cartoons, he pretended to consume "Mean Pills" that the Ghostly Trio fed him and pretended to be a devil child and terrorize them. Casper reveals he never actually took the pill and actually did that to teach his uncles a lesson.

In the 1995 film, Casper was given the last name McFadden. He later appeared in the 1996 TV series, The Spooktacular New Adventures of Casper. This was the first theatrical film version of Casper, as well as the only Adaptations where Casper was seen in his human form. Unlike the cartoons and comics, where ghost are separate species from the human race like Goblins and ghouls, this version of Casper and the 1997 direct to video "prequels," Casper is a deceased human.

Main article: Casper (Casper and the Spectrals) In the anniversary of the first time that Casper came out, the revamped version of Casper appeared in Casper and Spectrals, a reimagining of the Casper the Friendly Ghost franchise

Another version of Casper appears in the 1997 direct to video of Casper: A Spirited Beginning and it's sequel, Casper Meets Wendy, where he is voiced by Jeremy Foley. It established that the trio and Casper are not related but rather , the trio "adopted" him into their family.

Here, Casper must scare a someone before Christmas, or he and his uncles will be banished to the darkness by Kibosh. However, when Casper failed after befriending human girl Holly Jollimore, the trio pick their nephew, Spooky, Casper's cousin, and use him to trick Kibosh into thinking Casper did turn into the scary ghost he wanted him to be. Later, to get back at the trio for using Spooky, Casper and Spooky team up with the latter's girlfriend, Poil. They scare the trio off, and since Casper scared his uncles, Kibosh makes this an exception. 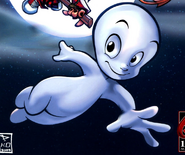